As one of the legendary hotels in the world Raffles Hotel opened in 1887 in an old bungalow known as the Beach House. It was named after Sir Stamford Raffles, the founder of modern Singapore.

Tropical suites were as much a part of Raffles Hotel’s early style as bentwood tables and rattan chairs. Over the years the hotel has evolved into one of the world’s most beloved grand hotels and welcomed innumerable celebrities, writers and royalty. Declared a National Monument in 1987, the hotel reopened in1991, after a big restoration.

Raffles Hotel features 103 suites, 18 distinctive restaurants and bars, Amrita Spa and Raffles Hotel Arcade housing the best in regional specialities and international brand names. Even if you don’t stay there you must visit to experience the historic Singapore. 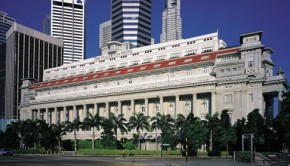