Tokyo Guide: Why you should visit Tokyo before the 2020 Olympics ? 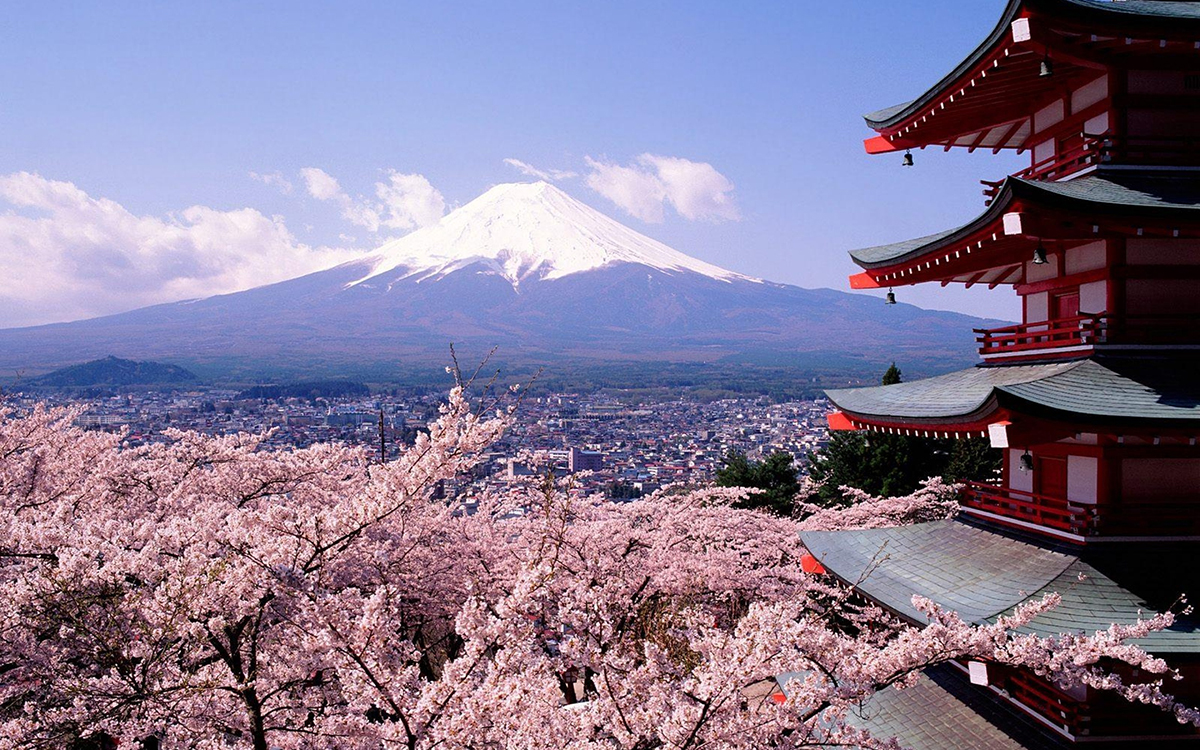 Tokyo won its bid to host the 2020 Olympics. There are a lot of reasons to visit Tokyo before … Tokyo is the biggest metropolis and the most sophisticated, safest and cleanest. At the same time it is the gastronomic capital of the world, having more Michelin-rated restaurants than London, Paris, New York, and San Francisco. And it’s home to the world’s best fashion stores… 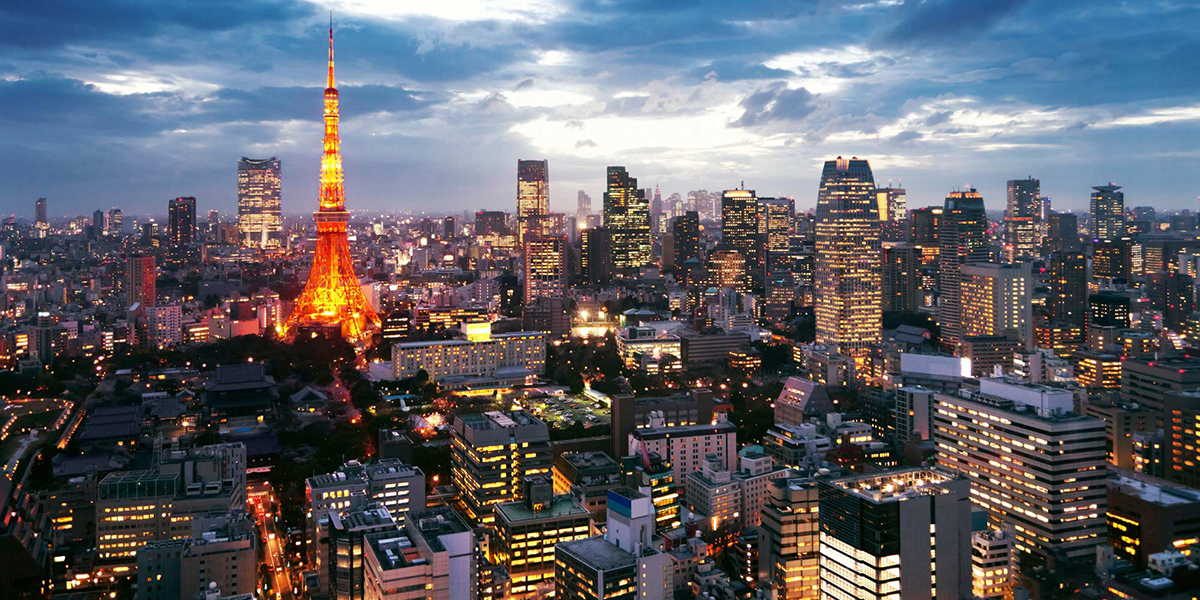 Tokyo is the modern metropolis, a land of staggering skyscrapers, dizzying neon signage, and the world’s busiest transport hubs. In many ways though, it’s still the Edo – the former feudal capital, with its Buddhist temples, kabuki stages and sumo tournaments. Tokyo doesn’t erase the old so much as pile on the new. It’s constantly evolving, mutating, reconsidering its past and rushing headlong into the future. This synergy between tradition and ingenuity is what makes Tokyo the city it is today. 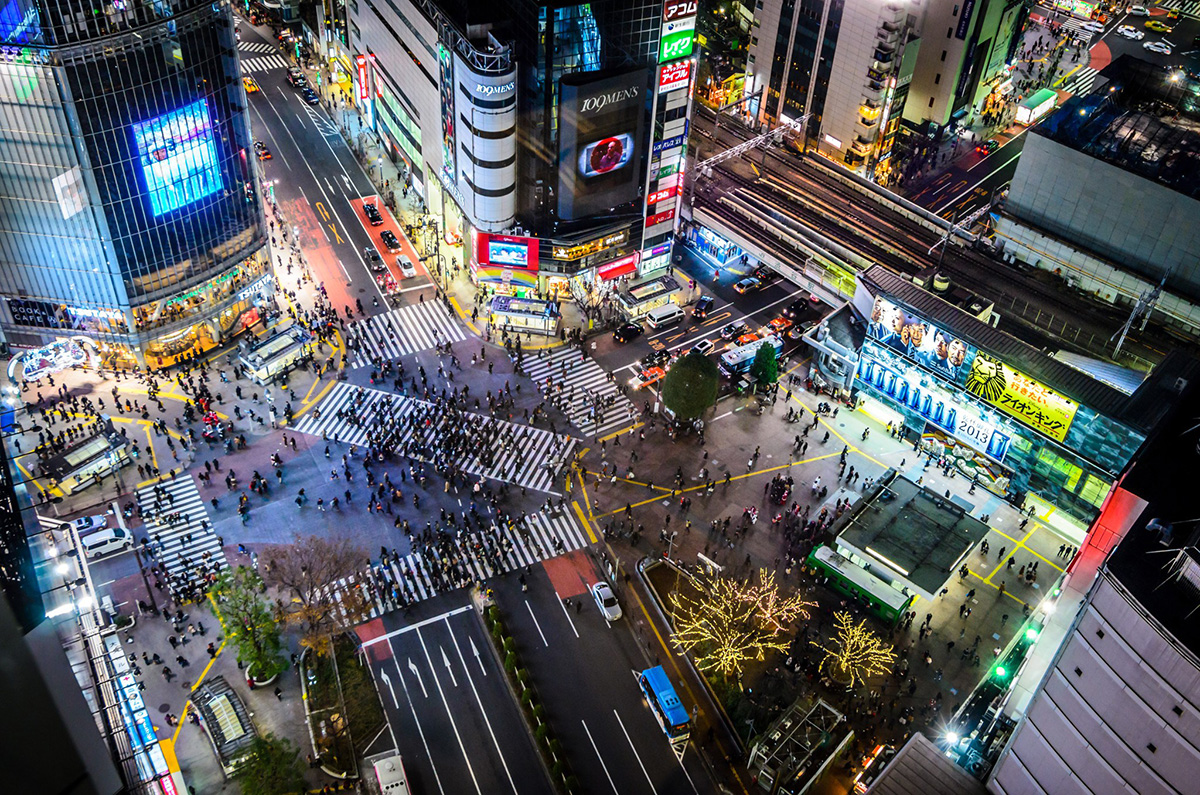 Visiting Tokyo was like stepping into the future. There is no place where this vision is more startling than the Blade Runner-esque ward of Shinjuku. Here, every skyscraper is illuminated by a glowing wallpaper of neon lights, in an arms race to capture the fleeting attention of Tokyo’s residents. Indeed, Tokyoites are the biggest technophobes anywhere; they’ve embraced technology in almost every aspect of their daily lives, while still holding strong to their own cultural identity. 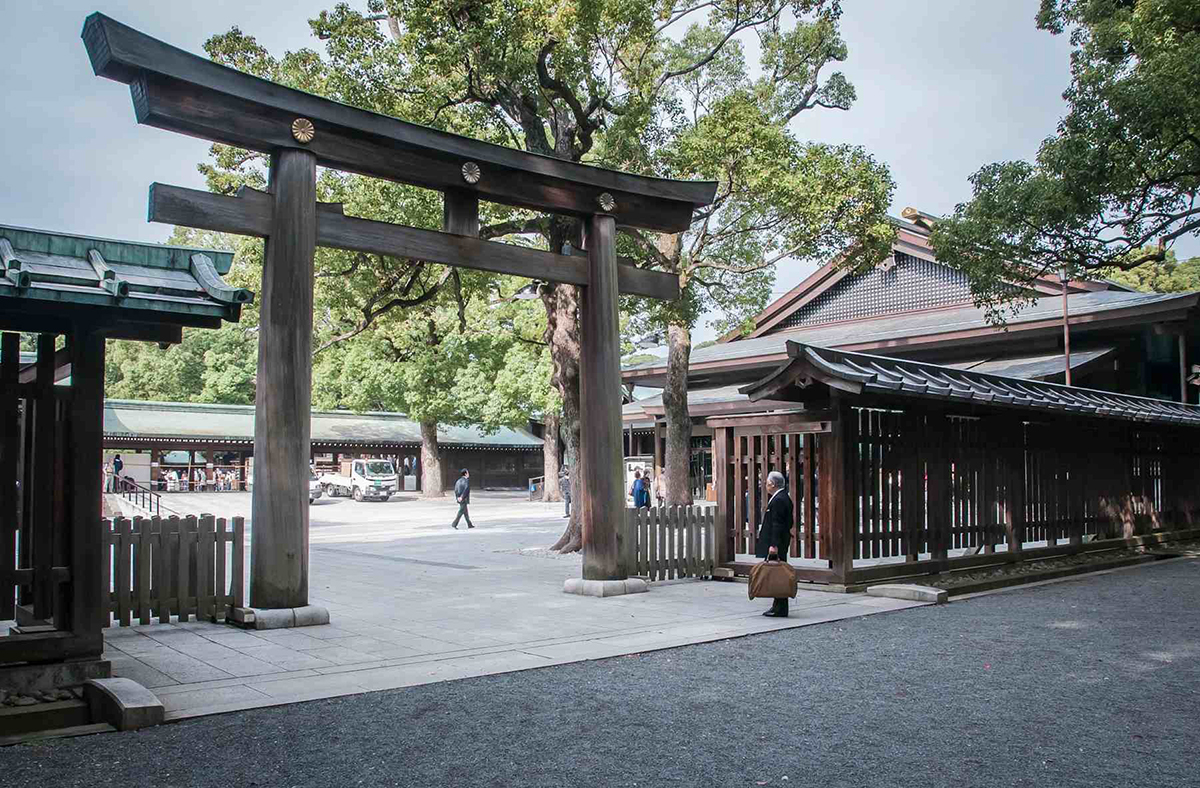 Places You Should Visit In Tokyo

There are countless independent fashion boutiques in the Harajuku area – all dedicated to generally insane forms of youth fashion. If you count adjacent Shibuya, Omotesando and Aoyama into the region, you have the world’s largest fashion district: featuring basically every single major designer brand in the world. This is the place to watch the street fashion in Tokyo.

The scramble street crossing outside of Shibuya Station is easily the world’s busiest, with a thousand people running into the middle of the street, weaving together in a huge organic mass. 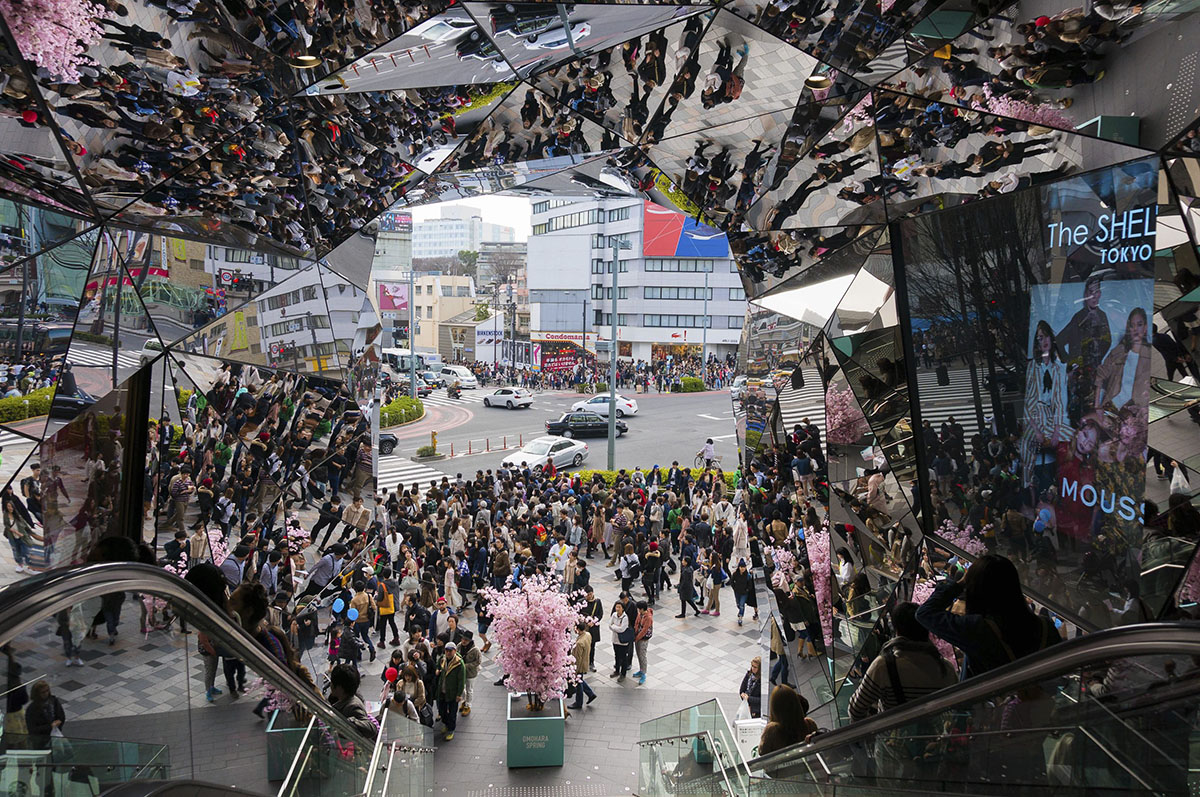 Tsukiji Fish Market is the largest fish market in the world. Handling more than 2,000 tons of seafood each day, Tsukiji-shijo (“market”) is a haven for fisherman, auctioneers and buyers for Tokyo’s best restaurants. As an added bonus, here the freshest sushi and most delectable grilled fish lunches can be had at reasonable prices…

Yoyogi Park and Meiji Shrine. This park was so huge it felt like walking through a forest in the middle of Tokyo. With many large trees still growing in its grounds, Meiji-jingu is a precious wooded area in the heart of the city. The area is also home to many birds and insects, and together with the extensive Yoyogi Koen (the park beside the shrine), it is a soothing oasis in the middle of Tokyo. 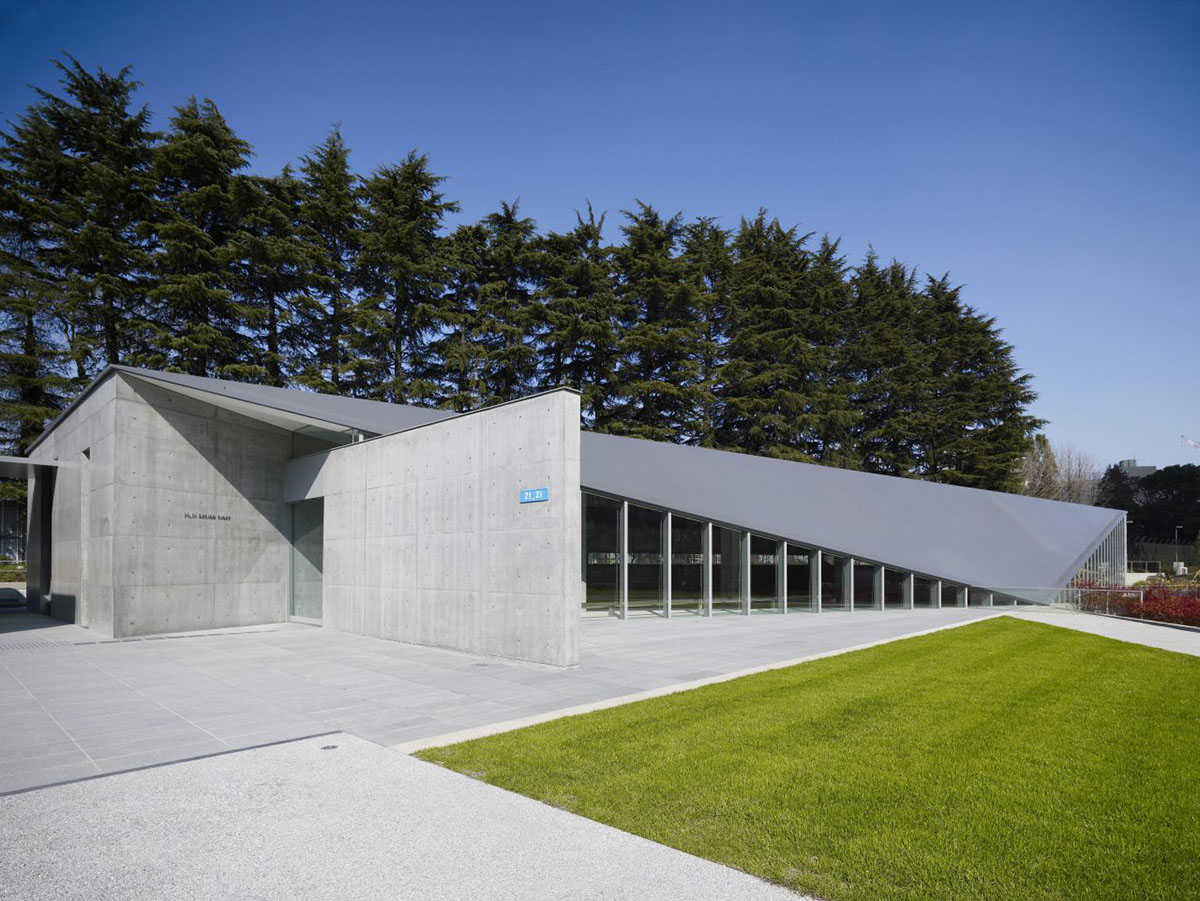 The Mori Art Museum was established in 2003 as a cultural complex on the upper floors of Roppongi Hills Mori Tower. Instead of maintaining a permanent collection, the Museum stages exhibitions, research projects, learning programs and other genre-straddling activities focused on contemporary art.

21_21 (two one two one) Design Sight is a design museum in the “Tokyo Midtown” complex. A low-rise building structure designed by Tadao Ando. It was Issey Miyake, who brought up the idea first. In 1988, he discussed the necessity of a design museum in Japan with creators such as Isamu Noguchi (painter, designer) and Tadao Ando (architect) at the Isamu Noguchi Exhibition. 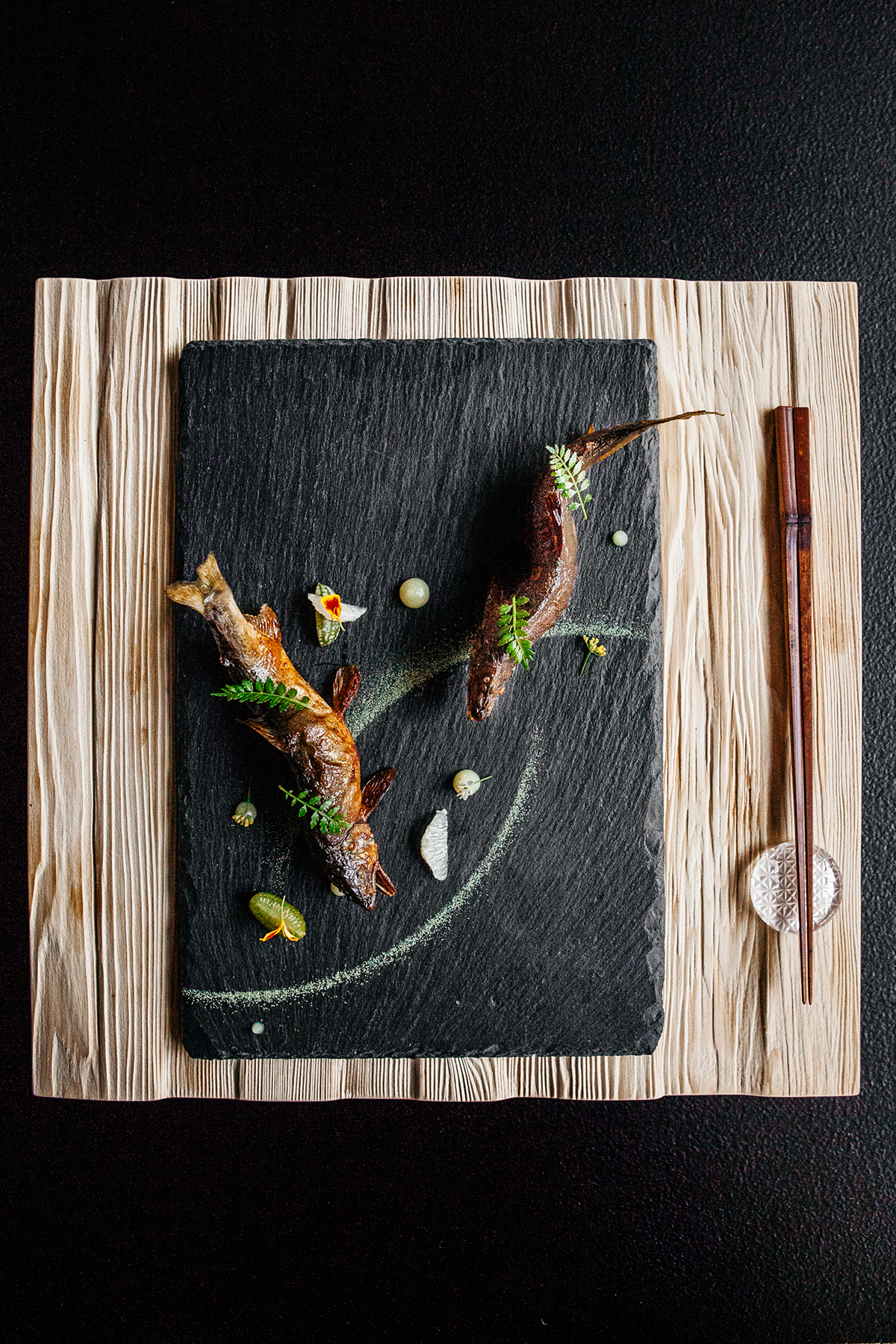 The best hotels which I have stayed and experienced in Tokyo in the last 10 years are the international chains Peninsula Tokyo and Conrad Tokyo for their perfect location and services. And Imperial Hotel for the Art deco combined with great Japanese service…Unfortunately the legendary Park Hyatt Tokyo which was the backdrop of the critically acclaimed film, Lost In Translation lost its allure totally. 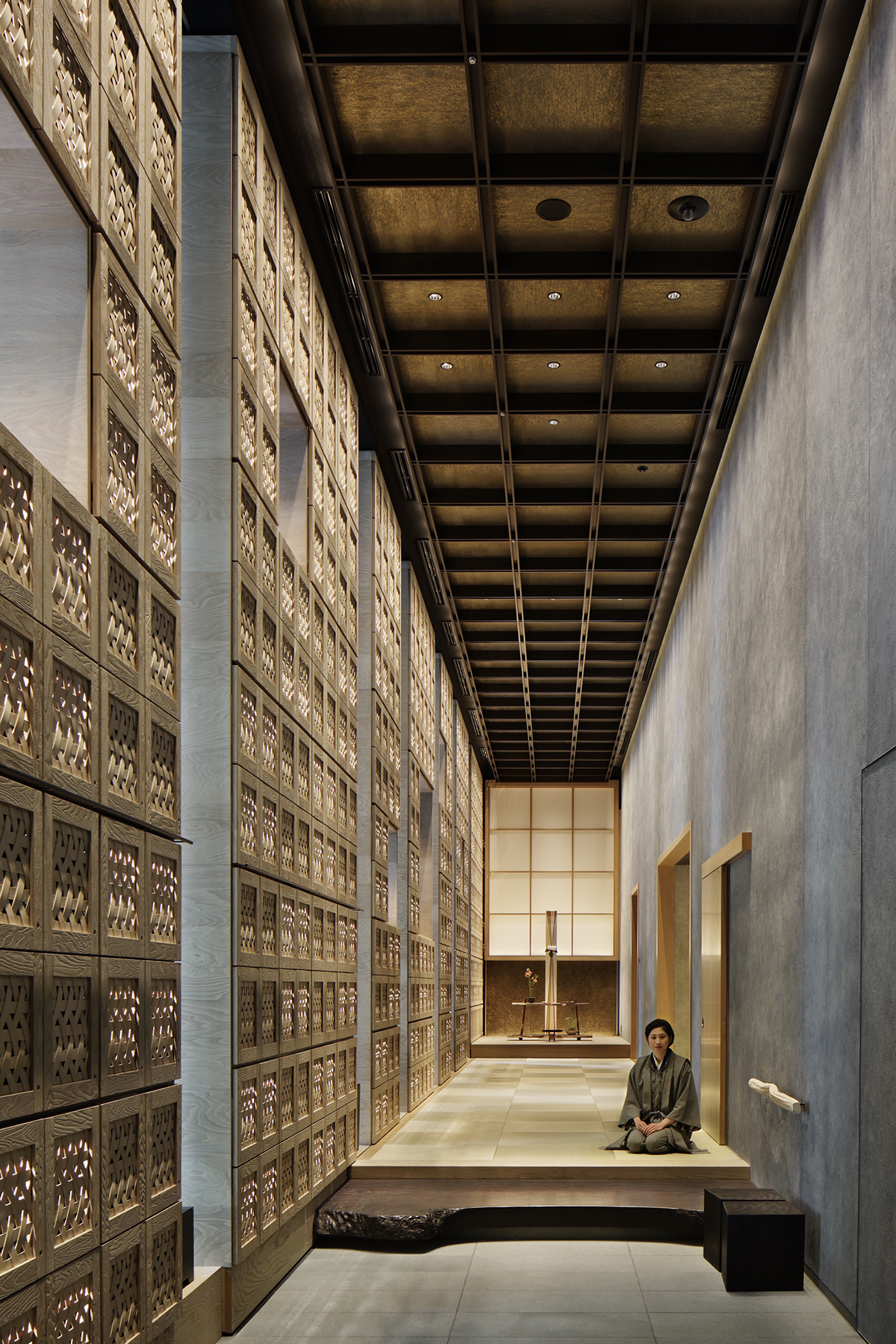 Japan is known for its ryokans: authentic guesthouses which uphold classic cultural traditions of the country such as futons, tatami mats, sliding paper doors and low wooden tables. There are hundreds across the country, but you won’t find one in Tokyo — until now. It’s the first city hotel for the luxury Hoshinoya hotel chain which is all about preserving the traditions of Japan in the heart of a cosmopolitan city.

Although the hotel is a huge modern tower block, it’s actually very discreet, and even difficult to find. The whole building is covered in a matt-black metal grill, formed into a flower motif.  The enormous entryway door–made from a single cut of cypress–quietly opens. A guide in a kimono greets you with a smile, closing the door behind you as you step inside. Suddenly, all noise has come to a standstill. A long tatami hallway extends before you, ending at an alcove that displays a seasonal ikebana arrangement. An impressive array of bamboo shoe-boxes lines the hallway. You take off your shoes and walk down the hallway in your socks. It is what you had imagined a traditional ryokan would be, and yet completely different. You quietly marvel at this seamless marriage of the traditional and the contemporary. 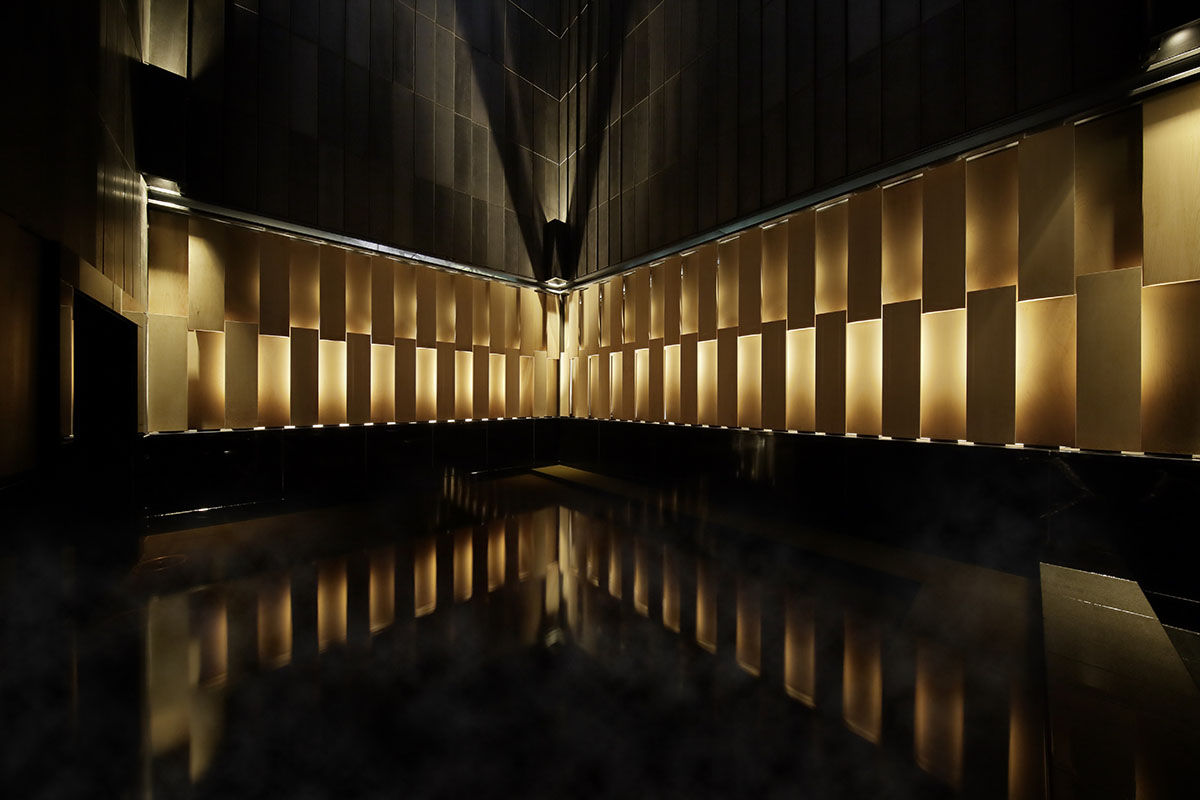 The most beautiful and amazing space of the hotel is its Onsen on the 18th floor. It consists of two bath halls, separated by gender. The baths are fed by hot spring waters drawn from 1,500 meters below the ground. Each bath hall contains an indoor and outdoor bath, connected by a cave-like tunnel. The outdoor bath is located at the bottom of an open-roof chamber with soaring walls that frame the sky above. Through the open roof, guests are presented with a private viewing of a dynamic tapestry painted with the ever-changing colors of the sky and decorated with clouds of many shapes. At night, pleasantly cool breezes blow in, bringing seasonal aromas with them.

In Hoshinoya Tokyo Chef Noriyuki Hamada serves only to the hotels guests his Nippon Cuisine, produced by Japan’s forests. 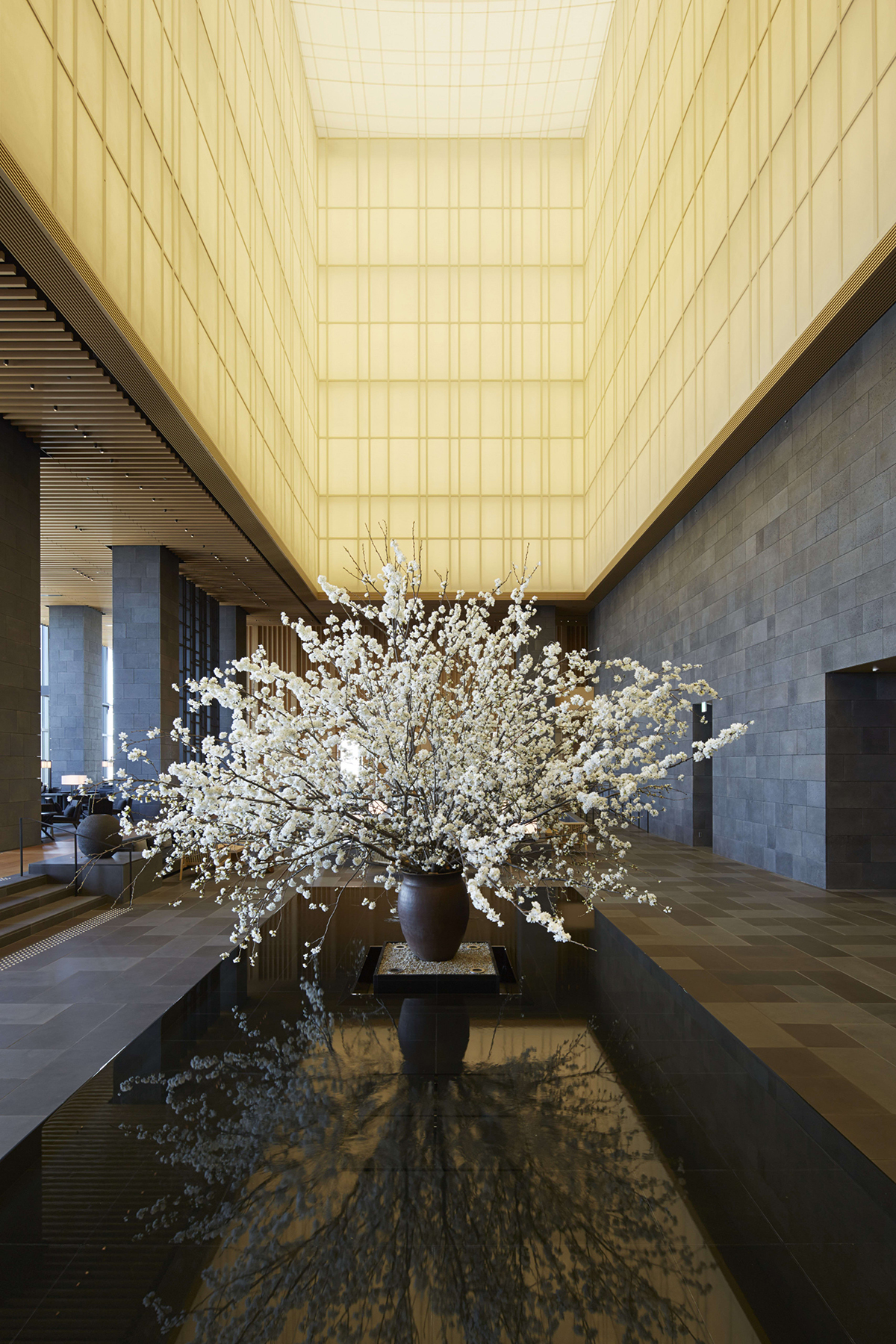 The Aman group’s 27th hotel stands in a category of its own as the first “urban” Aman. It’s biggest to date, with 84 rooms, and it occupies the top six floors of 38-storey Otemachi Tower.

An ear-popping lift transports visitors to the 33rd floor lobby where a vast reception gives way to views across the city. A dramatic ikebana flower arrangement, surrounded by water and two meditative rock gardens, takes centre stage in reception beneath a 30-metre high ceiling of white washi rice paper. A kimono-clad musician strums a classical koto nearby. 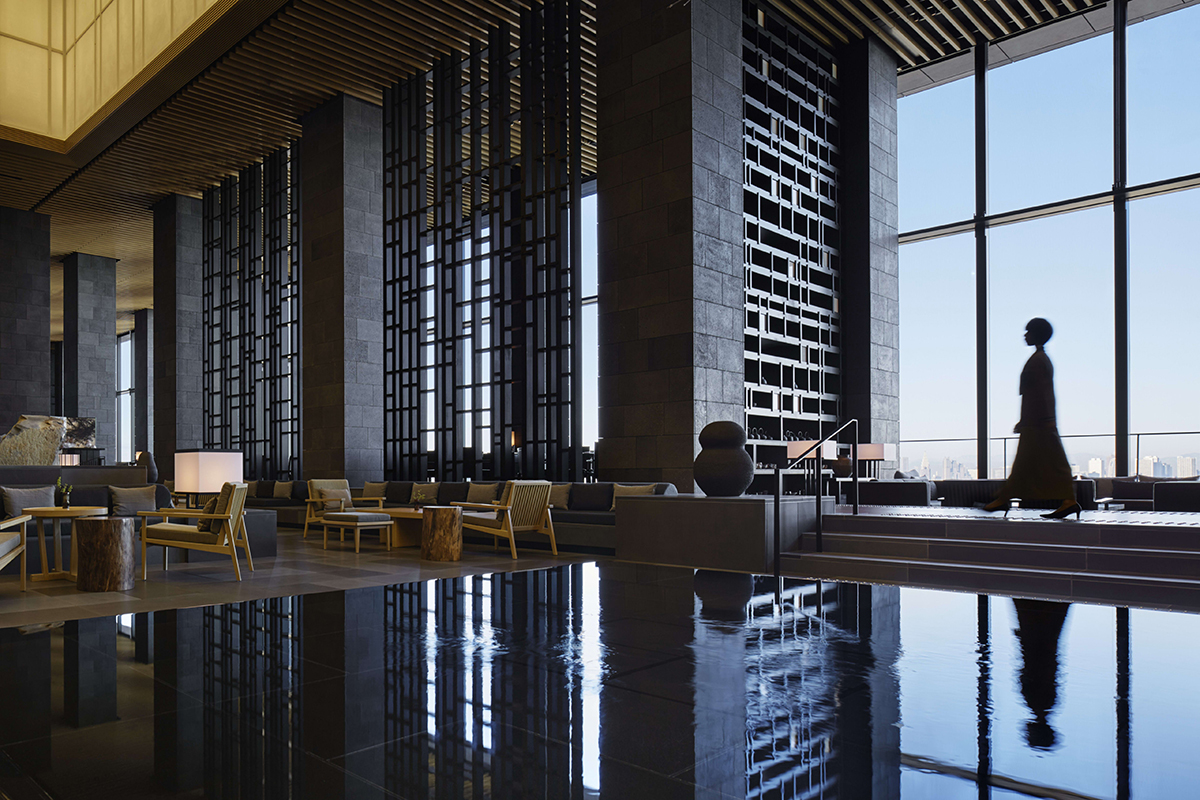 The minimal interior, designed by Kerry Hill, taps into Japan’s design heritage with its wood, paper and stone, while tall partitions create loose boundaries between the lobby, lounge, restaurant and bar. Even the food matches the monochrome decor.  The spa is central to the Aman concept so it is little surprise that here, it spans two floors and an epic 2,500 square metres. Highlights of the light- and wood-filled space include a soothing onsen-style stone bath with views across the city plus restorative massages inspired by seasonal herbs and traditional Japanese kampo medicine. 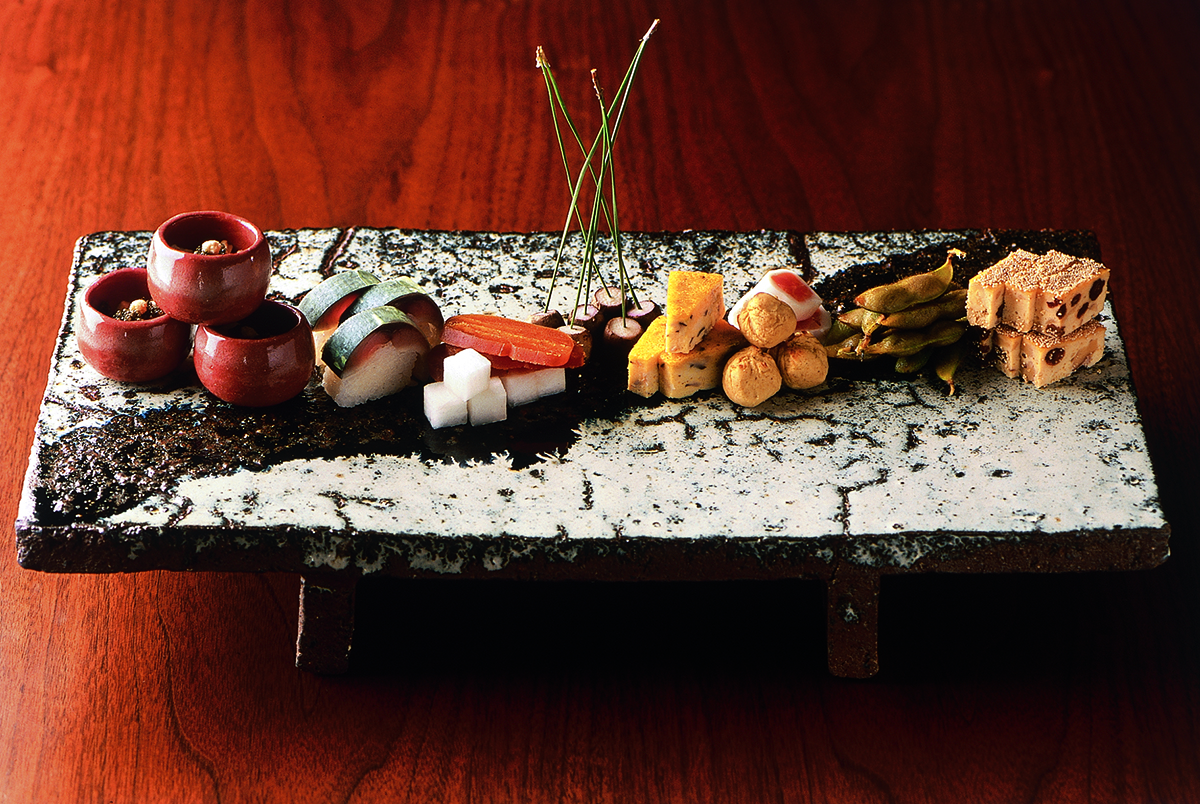 Tokyo has the most Michelin-starred restaurants in the world in 2018. But in Tokyo you can eat very good food almost everywhere… there’s definitely a dedication to excellence in Japanese kitchens, whether in five-star hotels or humble alleyway “yokocho” noodle shops.

For the best Sushi you have to visit Sukiyabashi Jiro Honten, a three-Michelin-starred Japanese sushi restaurant in Ginza.  Jiro Ono has been regarded as the greatest sushi craftsman alive and is credited with innovating methods used in modern sushi preparation. Reservations for the following month are taken on the first day of each month.  It is over in 30 minutes but, while expensive, it is quality sushi that truly satisfies. 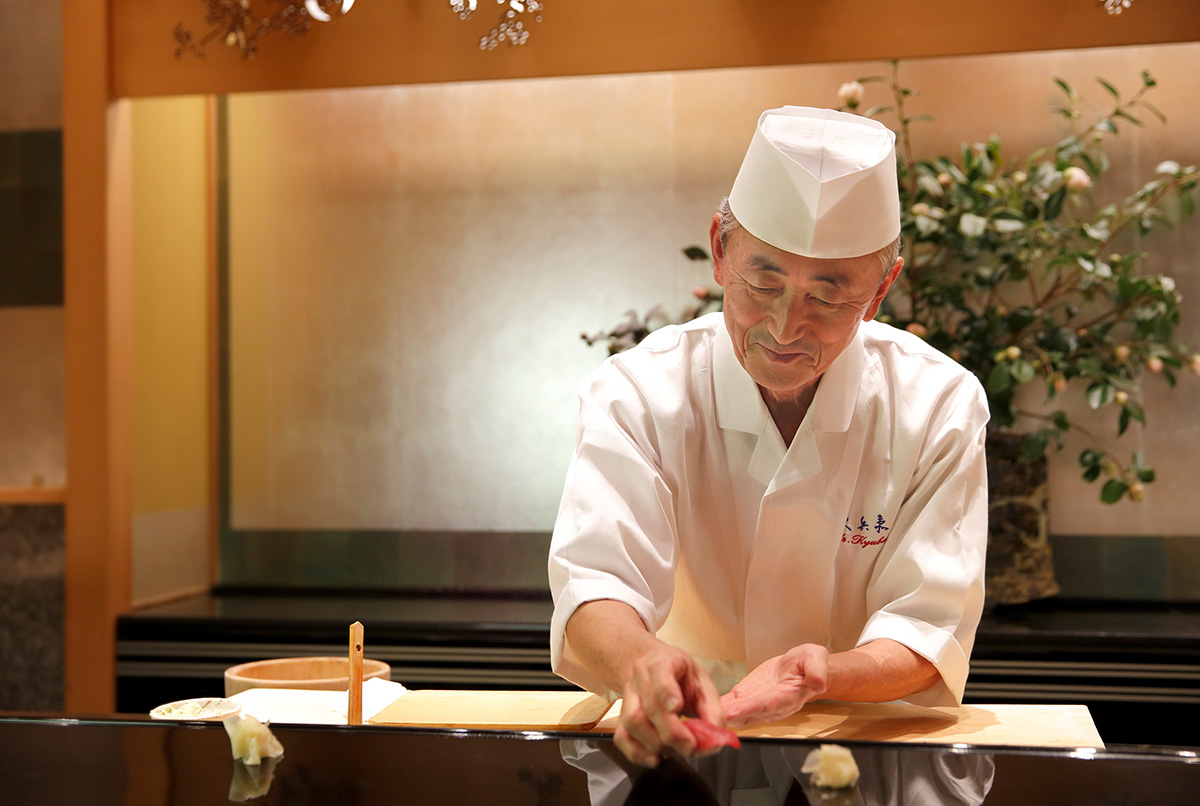 Perched on the 40th floor of the Park Hyatt, from Kozue you can  see as far as Mount Fuji. A meal at Kozue is a journey into the heart of Japan’s sophisticated culinary culture. In pursuit of umami, Chef Ooe offers a menu that spans a range of culinary pleasures from traditional country-style dishes to an innovative interpretation of kaiseki.

Ginza Kyubey, one of the most highly regarded sushi establishments in Japan stays true to the flavors of Edomae, the style of sushi from the flourishing Edo period (1603–1868) in the history of Japan. The quality of the food is very good, the setting convivial, and reservations are not too difficult to obtain. Walk-ins are even allowed at lunch!

Sample traditional Japanese dishes given a contemporary twist at Kazahana, which is on the top of Conrad Tokyo.  Take in the skyline view through floor-to-ceiling windows and appreciate the contemporary Japanese décor. Savor innovative Sushi, Kaiseki and Teppan dishes while taking in the minimalist design of this skyscraper restaurant. 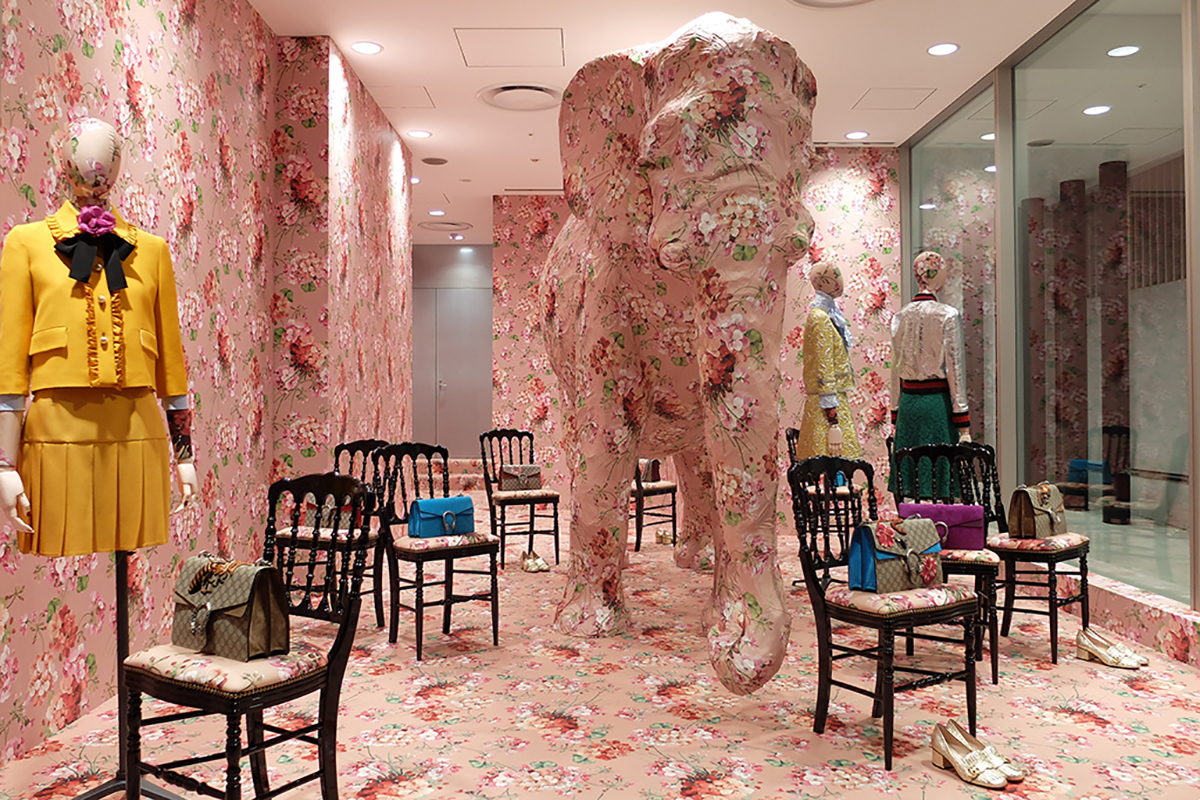 Apart from designers heaven in Tokyo you can find everything : from traditional goods to luxury brands, essentials to quirky novelty items, limited editions to mass market goods. The categories and choices are endless.

The twin neighbourhoods of Harajuku and Aoyama are home to the famed Harajuku girls (and boys), the youthful shopping strip Takeshita-dōri and the stylish boulevard of Omote-sandō. Sophisticated high fashion rules the Aoyama end of Omote-sandō, while the experimental hipsters of Harajuku layer haute couture with vintage finds. And then there is Ura-Hara, the maze of backstreets behind Omote-sandō, where you’ll find eccentric little shops and secondhand stores. There are countless shopping options: get started at Laforet, 6% Doki Doki and Sou-Sou for clothes and accessories; Gallery Kawano for vintage kimono. 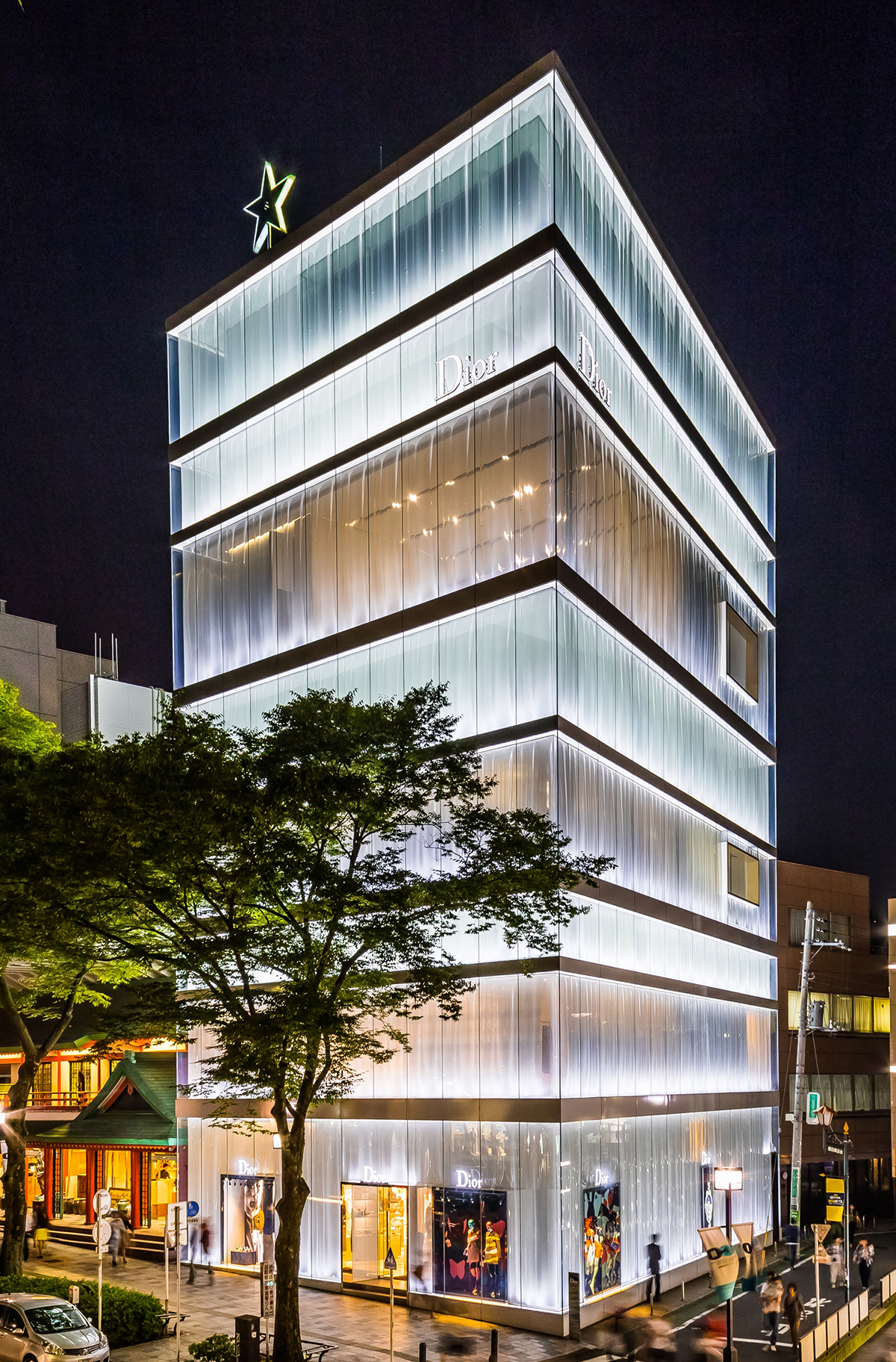 Dubbed as Tokyo’s Champs-Élysée, Omotesando Avenue breathes luxury with its elegant Zelkova trees and upmarket ambiance. This is a street dedicated to branded fashion where big names in the international fashion industry like Dior, Gucci, and Louis Vuitton have established shop. Similarly, malls such as Omotesando Hills and Tokyu Plaza carry posh brands in apparel and other lifestyle categories. 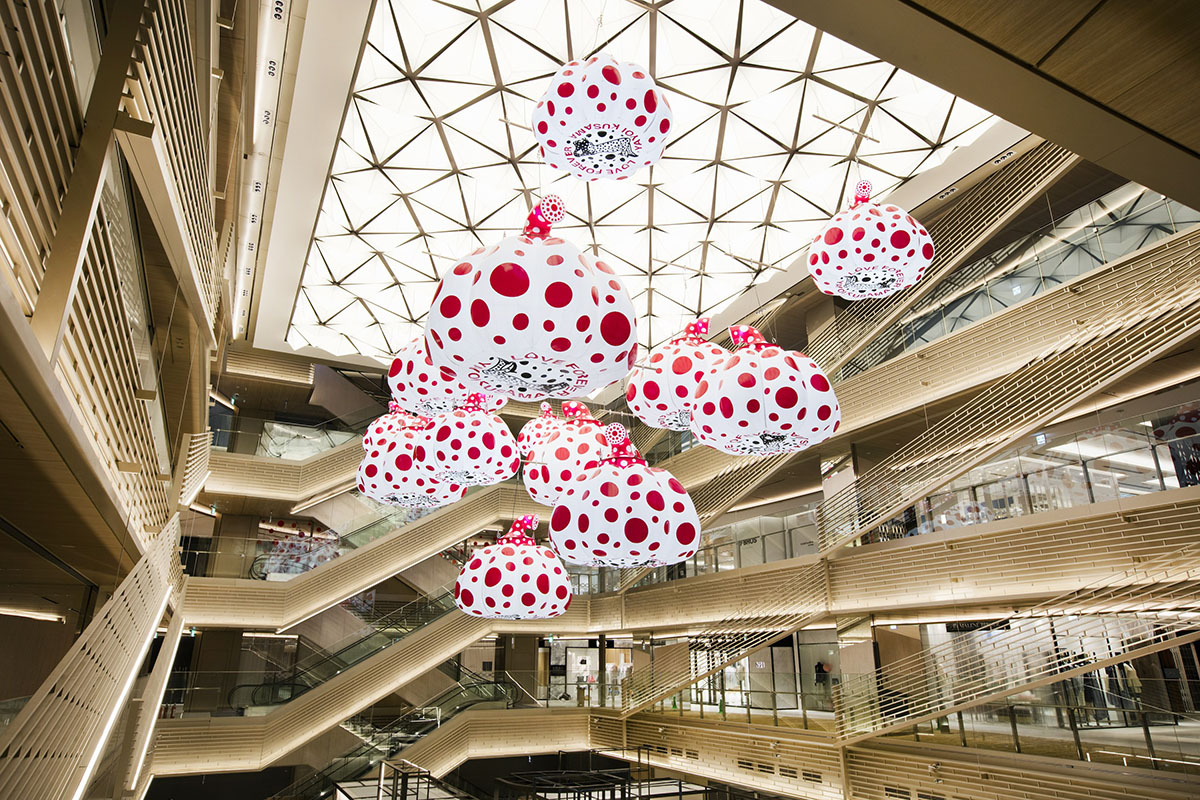 Ginza is the affluent shopping district in Tokyo, home to the city’s posh boutiques and gleaming department stores, such as the classic Mitsukoshi and avant-garde Dover Street Market Ginza. There’s also the gleaming new high-fashion mall, Ginza Six But tucked in between some of the more imposing facades are simpler pleasures, like the fine crafts at Takumi, the gourmet food items at Akoymeya and the nine floors of stationery and art supplies at Itōya. 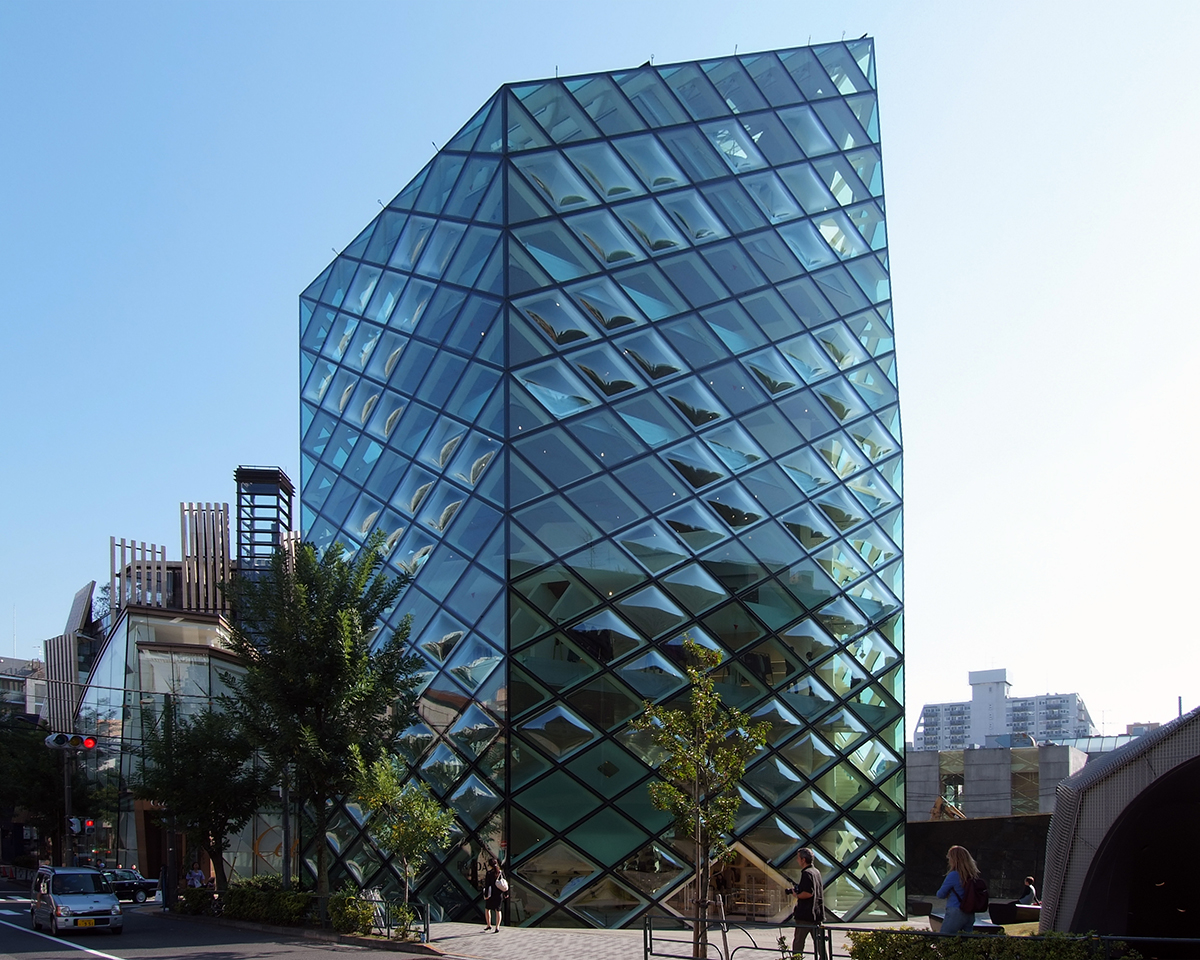 Visiting Prada, Cartier or Dior boutiques brings with it an extraordinary reward. They provide, free of charge, a chance to experience some of the most spectacular buildings in the world.

In the last years, many of architecture’s stars, including Renzo Piano, Rem Koolhaas, Toyo Ito and Tadao Ando, have been hired to design shops for luxury brands and have turned the city into a battleground for a rare, and spectacular, game of architectural one–upmanship.

The best neighborhood for this type of “architectural shopping,”  is Omotesando.  The level of boutiques and architecture was elevated about a decade ago, when the Pritzker Prize-winning Swiss firm Herzog and De Meuron designed a breathtaking store for Prada on the narrower, more hushed, eastern end of Omotesando. New York architect Stephan Jaklitsch designed a boutique for Marc Jacobs with a facade covered, in various sections, with smooth glass, etched black stone tiles and perforated steel. A space-age storefront by the British firm Future Systems for Comme des Garçons has warped glass walls and some of the funkiest merchandise on the street. 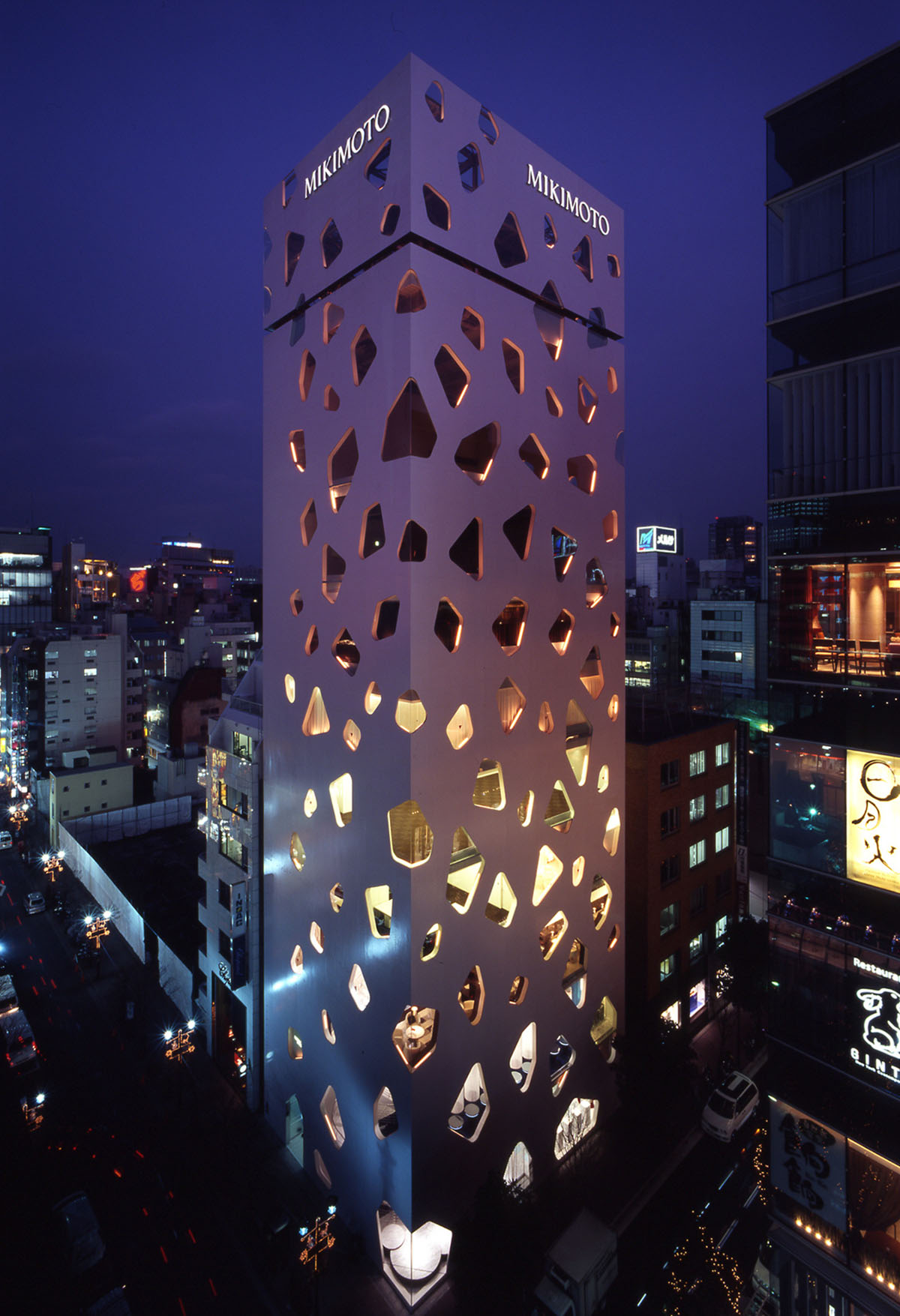 Once you head west, to the wider section of Omotesando, the first stop is arguably the best of them all — the Japanese master Toyo Ito’s Tod’s Shoes. Head just a few more blocks west and you arrive at Christian Dior, designed by yet another Pritzker laureate, the Japanese firm Sanaa. The architects have created a tall, narrow light box: Windows are covered by translucent screens that ripple like curtains, so only colorful neon peeks through.